The University Classified Staff Council (UCSC) recently presented educational awards to 15 college-bound children of UTHealth classified staff employees. The awards were a result of generous donations from the university community and executive leadership.

The award recipients are:

Twins Ryan and Wesley Cummings, sons of Sharon Cummings, a program manager with UTHealth School of Public Health, will both attend Texas A&M University. Ryan is described as someone who “holds himself to high standards and stays in the academic race with guts, grit, and perseverance.” Wesley is described as someone who has a passion for helping others, and who “often assists his classmates in understanding difficult lessons and in studying for tests.”

Caroline De La Garza, daughter of Teresita De La Garza, a research assistant at UTHealth School of Public Health in Brownsville, is described as someone who values education. “I am the first woman along my family tree to get accepted to a four-year university, so I have come to treasure the blessings of education,” her essay reads. She will attend the Honors College at University of North Texas.

Anderson Dedmon, daughter of Albert Dedmon Jr., RN, BSN, with UT Physicians EP Heart, is described as someone with a magnetic personality. “Students gravitate toward her for academic help because she makes them feel empowered and motivated.” She was also awarded the inaugural Debbie Norris Award for community and extracurricular excellence, and will attend The University of Texas at San Antonio.

Katelynn Duron, daughter of Maria Carmen, senior research nurse in cardiology at McGovern Medical School at UTHealth, is described as having a discipline and dedication to mathematics. “Known for asking probing questions, Katelynn is always prepared for class, and her work is well-organized and illustrates an attention to detail.” She will attend the University of Houston.

Brandon Foskett, son of Michelle Foskett, postdoctoral affairs coordinator, is described as having a passion for music. “Brandon is a diligent, creative, and superior student… Music melded with academics provides a more complete representation of Brandon. Although highly successful in rigorous classes, his passion lies in music.” He will attend Texas Tech University.

Jerry Han, son of Wei Wu, senior statistician with the Children’s Learning Institute at UTHealth, is described as studious and with ambition to change the world. He achieved a perfect 1600 on his SAT as well as five perfect scores on various AP exams. “I hope to combine informatics and management science through quantitative analysis and apply my technical knowledge to reach world business applications in order to create genuine change.” He will attend Massachusetts Institute of Technology.

Yun-Su Kim, son of Do-Kyun Kim, senior research engineer at UTHealth School of Public Health, is described as an accomplished leader in his field of choice – advertising and global marketing. He has a kind and passionate personality and has no trouble getting along with people as evidenced by his ability to communicate with others and his experiences in scouting leadership. He will attend Texas A&M University.

Thomas J. McClintic, son of Thomas McClintic, a network architect in the telecommunications department, has an interest in computers and programming. The young McClintic is currently working as a seasonal hire in UTHealth’s Information Technology department, and will attend The University of Texas at Dallas.

Kwame Ofori, son of Kwame Ofori, manager of research at McGovern Medical School’s EP Heart Program, is described as “very enthusiastic and energetic about his subjects at school. His work ethic and ability to problem solve and synthesize at an advanced level is superior to that of most high school students.” He will attend Baylor University.

Samuel Oladejo, son of Helen Obasuyi Oladejo, a nurse at UT Physicians Sickle Cell Clinic, is described as someone who is “reliable, smart, funny, and always has the best intentions. He is a role model, a leader, a scholar, and a great friend to others.” He will attend The University of Texas at Austin.

Amber Saucedo, daughter of Arisve Ramirez, a research assistant at UTHealth School of Public Health in Brownsville, is described as a deep thinker. “Amber approaches any problem by searching first for the big picture, usually reaching a deep conclusion after reflecting on what she has learned.” She will attend the University of Miami.

Sadie Smith, daughter of Ketti Eipers-Smith, senior program manager in the Department of Pediatrics at McGovern Medical School, is described as a successful student in academics and extracurricular activities. “Sadie is a student with the dream of going to a university to expand her heart and challenge her mind. She is a rare soul who has an endless amount of determination, spontaneity, rigor, and passion.” She will attend Trinity University.

Abel Thomas, son of Stanley Kanatharayil Thomas, a nurse at UTHealth Harris County Psychiatric Center, was born and raised in United Arab Emirates, and moved to the United States four years ago. He said he is nervous and excited about the journey ahead. He will attend the University of Houston.

Anvi Veerisetty, daughter of Alka Veerisetty, a histology technician at McGovern Medical School, is described as someone with a clear vision, who has the ability to remain on task with excellent organization skills. She will attend Texas A&M University. 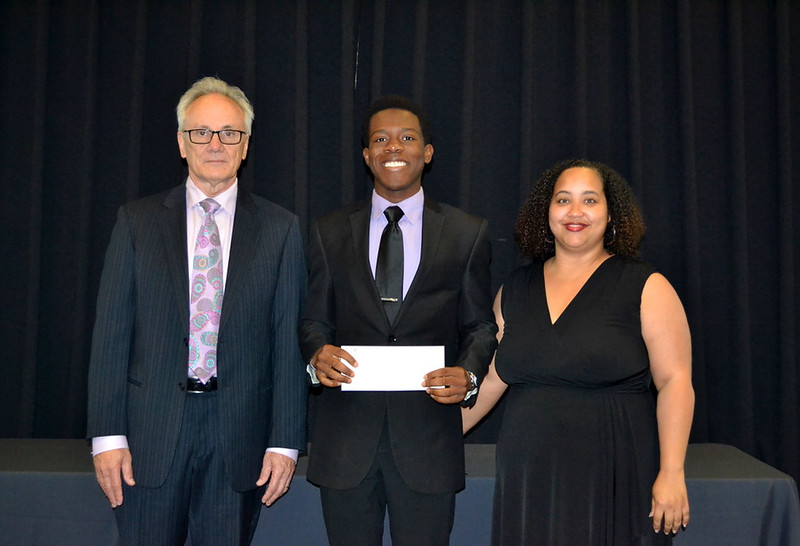