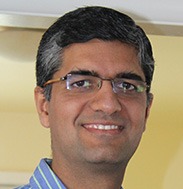 Ashish received his bachelor’s and master’s degrees from University of Delhi, Delhi. He carried out his doctoral work in the laboratory of Anuranjan Anand at the Jawaharlal Nehru Centre for Advanced Scientific Research, Bangalore and his postdoctoral work in the laboratory of Aravinda Chakravarti at the Johns Hopkins University School of Medicine, Baltimore, where he continued working as a Research Associate before joining the Institute. His research focuses on understanding how sequence variation in cis-regulatory elements controlling gene expression leads to phenotypic variation (disease risk and trait variation) and utilizes electrocardiographic QT interval as a model quantitative trait.

Variation in gene expression regulation, largely due to sequence variation in non-coding cis-regulatory elements (CREs), has been a key to development and evolution across species, primarily through trait variation within a species. In humans, for example, genome-wide association studies (GWAS) have beyond doubt established a major role for variable gene expression as the basis for trait variation and disease risk. However, the specific molecular components and structure of this regulatory apparatus underlying gene expression variation in humans remains largely unknown and is our primary research focus.

We utilize electrocardiographic QT interval as a model quantitative trait for mechanistic understanding of complex traits/diseases. QT interval, with a heritability of 35%, is a clinically relevant quantitative trait as its prolongation or shortening is associated with an increased risk of cardiovascular morbidity and mortality, primarily in the form of cardiac arrhythmias leading to sudden cardiac death (SCD), which is the leading cause of deaths in US. A major reason for studying the QT interval regulation is to understand the genetic risk factors for SCD in the general population. Genetic variation is a major source of QT interval variation and GWAS of the QT interval in the general population have identified at least 35 loci that together explain ~10% of the phenotypic variance. Our research goal is to understand the molecular basis of these observed genetic associations.

In order to perform the molecular characterization of GWAS signals, our research involves identification of the CREs whose functions are altered by disease/trait associated variants (causal variants), the transcription factors whose bindings are disrupted at the CREs due to causal variants, the target gene whose expression is modulated, and then linking the perturbation of target gene expression to a trait/disease relevant cellular or organismal phenotype. We utilize a wide variety of genetic, biochemical, cellular, functional genomic and computational approaches and apply them on a locus-by-locus basis to identify each of these components.