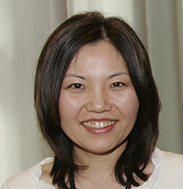 Education and training:  Dr. McCarty received M.S. from Northwestern University majoring in Biochemistry. She received her Ph.D. degree in Medicinal Chemistry and Molecular Pharmacology at Purdue University in 2000. She had post-doctoral research with Dr. Harvey Cantor at Dana-Farber Cancer Institute (DFCI) and Harvard Medical School from 2000-2005. Her post-doctoral training involved investigating mechanisms of immune homeostasis and central tolerance. She discovered the genes that determine bidirectional differentiation of CD4+ T cells and CD8+ T cells in murine thymus, which led to the discovery of an essential cell signaling pathway involving the Misshapen-like kinase 1 (MINK) in deletion of autoreactive T cells. She received a NRSA fellowship (T32 07386) during her postdoctoral training. She received Research Scholar Development Award (K22) from NIAID in 2006 based on the gene signature she discovered in the SAGE screening.

Current project: One of my lab main interests is to delineate the mechanisms of cancer dormancy and proliferation. We aim to delineate how changes in metabolism including protein synthesis and degradation regulate cancer dormancy and proliferation. We use multiple myeloma (MM) as a model disease as well as mice models. We are also interested in studying roles of quiescent tumor cells in cancer progression and relapse. We discovered quiescent MM stem-like cells prefer to reside in the osteoblastic niche within the bone marrow rather than the vascular niche (Blood 2014, Cover, PMID: 24425802, IF: 13.164). This specialized niche provides signals to tumor cells, and the interaction between tumor cells and their microenvironment provides unique therapeutic options for patients. Our study is the first to demonstrate a quiescent MM cell niche and the effects of functional interactions between MM cells and the microenvironment on tumor growth and progression. We also discovered a protein called TRIM44 expressed on the quiescent MM cells stabilizes hypoxia-inducible factor 1 alpha (HIF-1a) to support their survival (Leukemia 2018, PMID: 30089913, IF: 12.104) These quiescent MM cells in the osteoblastic niche were drug-resistant, suggesting these populations could contribute patient relapse after therapies.

We are also interested in understanding how transcription factors that determine normal B cell lineage differentiation are involved in malignant B cell growth and progression. One of those factors is PAX5, a determinant of normal B cell lineage development and plasticity. Upon genetic ablation of Pax5, pro-B cells acquire stem cell-like differentiation potentials in vivo and in vitro, suggesting cell lineage commitment processes are reversible by altering the expression and function of PAX5. We discovered that PAX5 silencing in mantle cell lymphoma (MCL) leads to increased tumor formation in vitro and in xenograft mice, indicating that PAX5 has a tumor suppressor-like function (Leukemia 2016, PMID: 26073757,). PAX5 downregulation was correlated with patient progression to advance MCL and with MCL patient survival, indicating that PAX5 downregulation can be utilized as a prognostic marker. Our lab also conducted high throughput screenings and identified small molecule inhibitors that target the growth of PAX5- MCL. Downstream of PAX5 signaling is BACH2, which is another transcription factor that is involved in drug responses in MCL. We discovered that BACH2 nucleus/cytoplasmic shuttling influences resistance to drugs that generate reactive oxygen species (Blood 2017, Editor’s pick, PMID: 28592433).