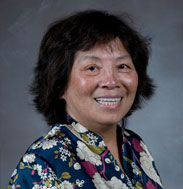 Dr. Teng’s laboratory is interested in the discovery of mechanisms contributing to the complex process
of atherosclerosis in humans and animal models and design and development of genetic and cell therapies
for the treatment of atherosclerotic vascular disease

Dr. Teng is an Adjunct Professor in the Center for Human Genetics at the Brown Foundation Institute of Molecular Medicine, and an Adjunct Faculty Member in the Department of Medicine at Baylor College of Medicine.

Education: Dr. Teng obtained her Ph.D. degree from McGill University, Quebec, Canada in 1987.  She did two years postdoctoral work in the laboratory of Dr. James Scott in London, England where she studied molecular aspects of apolipoprotein B (apoB) gene regulation.

Prior Professional Experience: In February 1989, Dr. Teng joined Dr. N. Davidson's lab as a Research Associate/Assistant Professor at the University of Chicago and pursued the investigation of apoB mRNA editing mechanism.  She cloned the enzyme responsible for apoB mRNA editing (deamination of cytidine 6666 in the apoB mRNA), named Apobec1 (apolipoprotein B mRNA-editing catalytic polypeptide 1).  This discovery provided a giant step for the field.  The gene was patented.  The APOBEC has since extended to become a large family of cytidine deaminase including AID, APOBEC1, APOBEC2, APOBEC3A-3H and APOBEC4.  AID is a key regulator of antibody diversification.  APOBEC3, especially APOBEC3G, displays anti-HIV activity.  The discovery of Apobec1 has led her to venture into a new direction by using gene therapy vector to deliver Apobec1 gene in vivo to regulate LDL production. She worked at Genetic Therapy Inc. for 10 months to develop viral vectors.  In October 1993, Dr. Teng was recruited to Baylor College of Medicine, Department of Medicine as a tenured track Assistant Professor (and remains at present as Adjunct Faculty).  She joined the Research Center for Human Genetics, Institute of Molecular Medicine in May 1998.

Description of Research Projects:  Dr. Teng's laboratory has generated many genetically modified dyslipidemia mouse models.  These models are being used to unravel the pathogenesis of atherosclerotic cardiovascular disease and to examine novel somatic gene and cell therapy that will regulate the disease development.  The past projects in Dr. Teng's laboratory were as follows:

1). Investigating the action of novel Ribozyme molecules in regulating the production of apoB and lipoprotein-associated phospholipase A2 (Lp-PLA2).  Lp-PLA2 may be the major link between inflammation and atherogenesis.

2). The role of PCSK9 in lipid metabolism and its potential novel role in the brain?  PCSK9 (proprotein convertase subtilisin/kexin type 9) is a serine protease.  The mutations within the PCSK9 gene in humans are associated with the level of plasma cholesterol.   Her laboratory was using shRNA to regulate the PCSK9 gene expression.  They were also generating monoclonal antibodies against PCSK9 by adenoviral vector to attempt to block the PCSK9 function.  Studies were designed to identify factors involved in PCSK9 complex.