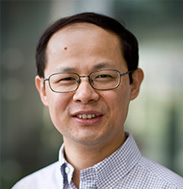 Dr. Wenliang Li’s research is to study novel molecular mechanisms of cancer metastasis with the goal of identifying new biomarkers and drug targets for the development of better therapeutics for human cancers.

Dr. Li obtained his Ph.D. in Genetics from Case Western Reserve University in 2004. His dissertation work was conducted in Dr. Bryan Williams’ lab at Cleveland Clinic Foundation, where he constructed a large cancer-specific cDNA microarray and used it to identify gene expression patterns that were associated with genetics and prognosis of human Wilms tumors. He then joined Dr. Ed Harlow’s lab at Harvard Medical School for his postdoctoral training, where he provided critical contributions in a series of collaborative studies in identifying kinases controlling survival and proliferation of human normal and tumor cells. In 12/2010, Dr. Li joined the Brown Foundation Institute of Molecular Medicine, UTHSC-Houston, as a tenure track Assistant Professor. Dr. Li also has a joint appointment in the Oncology Division of the Department of Internal Medicine, UTHSC-Houston Medical School. Dr. Li was promoted to Associate Professor in September 2018.

Cancer metastasis, the spread of tumor to other parts of patient’s body, is responsible for over 90% of cancer death. However, it is still poorly understood and the current approaches to prevent or treat human metastatic diseases are mostly unsuccessful.  Through genomics, RNAi and cDNA functional screens, Dr. Li’s lab has identified several critical but previously unknown regulators for cancer metastasis. Signaling pathways and molecular mechanisms of these genes are in study with molecular, cellular, biochemical, genomic and proteomic approaches, as well as with mouse models and patient samples. For example, Dr. Li’s lab is studying GRK3 (G-protein coupled receptor kinase 3), a kinase they identified from functional screens, in the progression of CRPC (castration resistant prostate cancer), especially the highly metastatic variant of CRPC, the t-NEPC (treatment-related neuroendocrine prostate cancer). These studies will yield new insights in cancer metastasis and facilitate the development of new cancer therapeutics and biomarkers.

Another exciting research program in Dr. Li’s lab is involved in identifying and studying novel regulators of epithelial-mesenchymal transition (EMT) and stem cell phenotypes. Epithelial-mesenchymal transition (EMT), a developmental process, is believed to play a key role in cancer metastasis, drug resistance, organ fibrosis and stem cell-like phenotypes. Kinases play central roles in many aspects of signaling transduction, cell physiology and diseases. They are also one of the most important gene families for cancer drug development. The literature search indicated that the majority of >700 kinases in human genome are still poorly studied. Dr. Li’s lab is employing unbiased functional screens against hundreds of human kinases to identify novel regulators for EMT and linking them to stem cell-like phenotypes and cancer metastasis. Investigation of the molecular mechanisms of these kinases will have a significant impact in expanding our knowledge in the crossroad of exciting and critical areas, such as development, stem cell, drug resistance and metastasis. These kinases may also become new biomarkers and cancer drug targets for the development of novel therapeutics for human cancer.

Note: The 4 PNAS papers in 2008 were selected as one of Signaling Breakthroughs of 2008 by the annual Editorial Guide of Science Signaling.

The University of Texas Health Science Center at Houston