All fluorophores emit light on a wide spectrum and some can also be simultaneously excited by multiple lasers in a flow cytometer instrument. Part of the emitted light from a single marker can therefore hit several of the detectors meant for other markers in your panel (Fig.1.). This spillover effect is cumulative across all fluorophores in the staining protocol, increases the background signal (and noise), and can even create distinct false positive populations.

Accurate flow cytometry analysis depends on the (mathematical) elimination of this spillover signal from the raw data and the process is called compensation (Fig.2.). Unfortunately compensation can only correct the average signal level, not the increased noise, and therefore negative populations often show higher data spread in multicolor panels than in unstained or single stained controls. This can make it more difficult to correctly identify dim populations (see also FMO controls).

The amount of spillover must be experimentally measured by running single stain controls separately for each of your fluorophores. Each control must include only one fluorophore (e.g. viability dye requires its own single stain control) and must have a clearly identifiable negative and positive population for that marker (a separate unstained sample may sometimes be used as “universal negative” for multiple markers). It is noteworthy that the extent of spillover and subsequent compensation are a property of the particular instrument and fluorophores, and are independent of the actual samples being run.

In cases where cells do not have clear positive population (rare events or low expression level) or the amount of sample is limiting (e.g. biopsies) “compensation” or “antibody capture” beads can be used instead of a biological sample to run the single stain controls. These beads bind antibodies through their constant regions (light chain or Fc part) and are a universal reagent to generate strong positive signal for each of your markers.

Fig.1. Spillover of FITC emitted light to PE detector. ~10% of emitted light from FITC hits the PE detector when both are on blue laser line. Resulting flow data must be corrected using compensation (or the situation can be avoided in the first place by moving PE to yellow-green laser line). 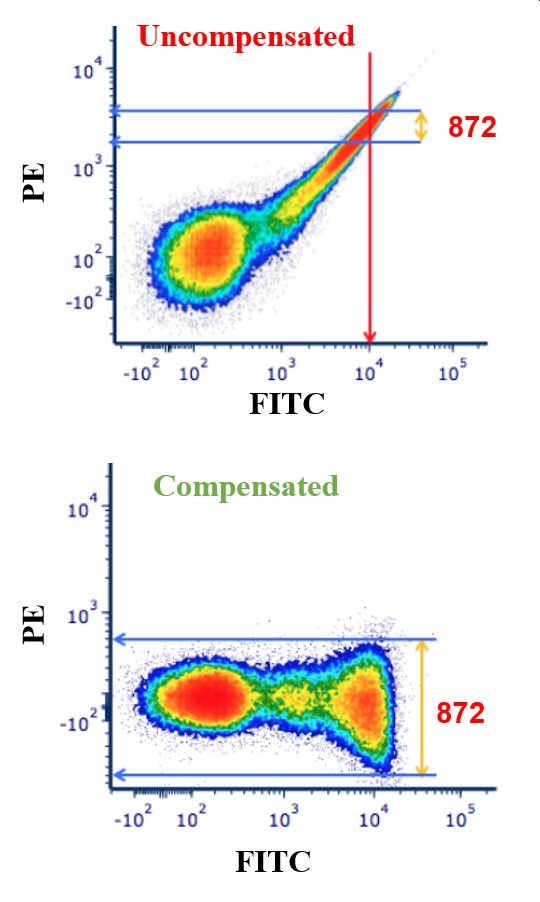 Fig.2. FITC single stain control before and after compensation. Compensation averages out the spillover of FITC emitted light from the PE signal. Note that compensation does not alter the existing data spread but can make it more visible by bringing a population downwards on a log scale.