Eve and John Franklin knew something was wrong with Abigail’s heart before she was born. An ultrasound revealed it was struggling to keep pace with her growing body.

“The doctors told us to prepare for the worst,” Eve says.

Continuous monitoring and countless tests grew into a cloud of anxiety that lingered long after Abigail’s birth at 38 weeks. Upon delivery, doctors whisked her to the newborn intensive care unit to receive a pacemaker to regulate her heart’s rhythm.

One in a million

Abigail was born with a rare defect called congenitally corrected transposition of the great arteries, where the connections of her heart developed backward. Her right ventricle, which normally supplies blood to the lungs, pumped blood to her body, while her left ventricle supplied blood to her lungs.

Often, the tremendous strain on the right ventricle to pump blood to the body leads to heart failure. But Abigail was one in a million — in one in a million: Her heart baffled doctors by functioning despite its defect.

Over the next 15 years, doctors learned Abigail’s heart also had a severe obstruction of blood flow to the lungs, a leaky valve, and a hole in her heart. Remarkably, these imperfections composed an unlikely harmony that preserved her heart through childhood.

“Her doctors called her perfectly imperfect,” Eve says. “Every error had a correction that just made things work.”

Although Abigail struggled with physical activities like running and riding bikes, she learned to compensate and enjoy life. “The only time I noticed a problem,” Abigail explains, “is when something big happened, like being exhausted during a walk in the summer heat.”

The improbable harmony of Abigail’s heart began crumbling in 2017. Climbing a flight of stairs turned her blue as her heart struggled to supply her body with oxygen-rich blood. Every doctor she visited said a heart transplant was her only option. But a transplant is a risky last resort, often bringing its own complications.

“When they told us this was Abigail’s only option,” John explains, “it was like someone predicting something terrible is going to happen—maybe not today or tomorrow, but it will happen.”

Eve and John also knew Abigail’s deteriorating heart might prevent her from pursuing her hopes and dreams, like becoming a cardiologist and a mother. 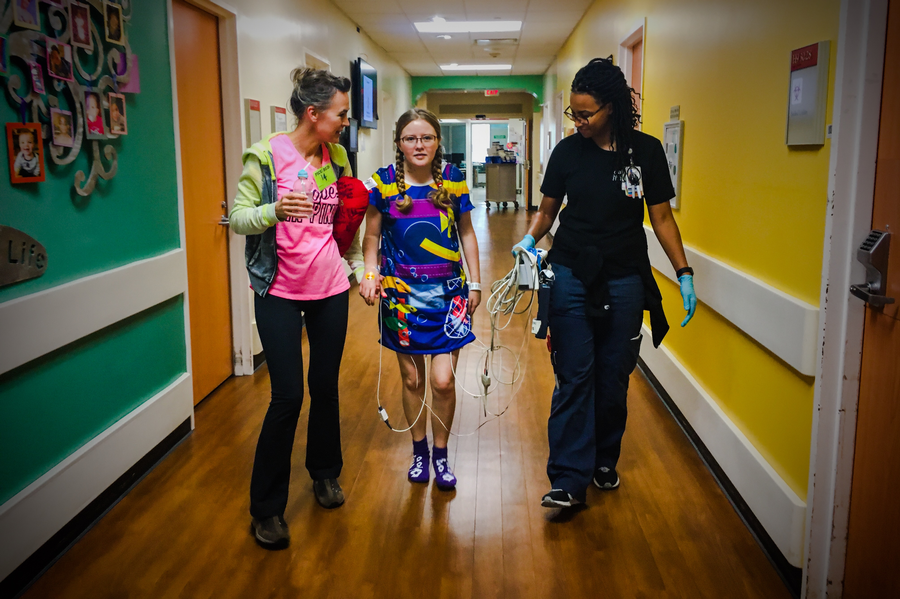 Then in June 2018, Eve found herself staring at her phone in disbelief and hope. A nurse from the Children’s Heart Center at Children’s Memorial Hermann Hospital called to say an innovative surgeon, Jorge D. Salazar, MD, was certain he could fix Abigail’s heart.

“Abigail’s situation was incredible,” says Salazar, professor and chief in the Division of Pediatric Cardiovascular Surgery at McGovern Medical School at The University of Texas Health Science Center at Houston (UTHealth). “We discovered her obstruction of blood flow to the lungs trained her left ventricle to work much  harder than necessary. By straining to pump blood across her obstruction her entire life, it trained itself for its intended role of pumping blood to her body.

Ordinarily, the left ventricle could not tolerate a new demanding role of pumping blood to the rest of the body instead of just the lungs. But Abigail’s imperfect heart enabled a perfect solution—its obstruction made possible a surgery to give her a normal heart.

In September, Salazar and his team completed a 12-hour open-heart surgery, where they closed the holes and performed a double-switch operation to rewire the arteries and ventricles. They were also able to remove her pacemaker to allow her repaired heart to regulate its own rhythm. Abigail now has a heart that functions normally.

The Franklins no longer worry Abigail will need a heart transplant. Eve recently went running with Abigail, something they could not do before the operation. “The freedom and the joy of even going for a run with Abigail just feels so good,” Eve says. “It’s a whole new world for us, and Dr. Salazar made it possible.”

“Before my surgery, I wanted to be a cardiologist, but I thought it was just a dream,” Abigail says. “I still want to be in the medical field. I can be anything.”

And, she can put her whole heart into it.