Dave Sookbirsingh was at home in March 2018 when he was left hobbled by a foot injury. When he stepped into the shower, his Achilles tendon snapped. Suddenly, the retired maintenance chief warrant officer was unable to walk. He had no idea that this would eventually lead to a serious medical problem.

An active 59-year-old, Sookbirsingh rode his bicycle often. In addition, for nearly 23 years, he had been treated for plantar fasciitis, a painful inflammation of the connective tissue in the foot. “I spent 26 years in the Army running, so I attribute that condition to my daily running,” he says.

An Achilles tendon rupture is a common injury, says Michael Greaser, MD, an assistant professor in the Department of Orthopedic Surgery at McGovern Medical School at The University of Texas Health Science Center at Houston (UTHealth).

Sookbirsingh went first to a local physician near his home in El Paso, Texas, to have the tendon repaired for what everyone assumed would be a routine surgical procedure. It was anything but. After his surgery, the entire incision opened, exposing the tissue below the skin’s surface. Three more attempts to repair the wound proved futile. The incision kept spreading apart. His doctor finally discovered the problem: his wound had become infected.

By then, Sookbirsingh was using a knee walker to get around.

When a wound doesn’t heal

His condition only got worse. “After these procedures, I was left with a hole in my leg for 60 days,” he recalls. “I got to the point where I thought I was going to lose my leg.”

Signs you have an infected wound

The U.S. Department of Veteran’s Affairs (VA) wanted Sookbirsingh to go back to his doctor in El Paso for another procedure. Alarmed by that prospect, he told the VA no, because after four unsuccessful procedures, he had had enough.

Finally, with his foot worsening, Sookbirsingh decided to take charge of the situation. He wrote a letter to U.S. President Donald Trump, explaining that as a 26-year veteran, he needed a better decision about his care. Shortly after he sent that letter, he got the call. “Somebody called me and said, ‘We approve everything, you can go down to Houston and get surgery,’” he recalls.

The scramble to save his foot would involve a joint effort between an orthopedic surgeon and a plastic and reconstructive surgeon at UT Physicians, the faculty clinical practice of McGovern Medical School at UTHealth. “When he came to see me, his entire Achilles had become necrotic, or had died, as a result of his long-standing infection that wasn’t being treated,” Greaser says. “Once the skin is lost over the Achilles tendon there is essentially no chance that the injury is going to heal.”

Getting the right treatment

Flap surgery involves transporting healthy, live tissue from one location of the body to another by disconnecting it from its original blood supply and attaching it to blood vessels at the new site. Essentially, it’s like transplanting your own tissue from one area of the body to another. The aim was to cover the tendon transfer with healthy tissue, allowing healing to occur without wound complications.

“Within UT Physicians, we have different specialties that all work toward the same goal, which is getting someone like Mr. Sookbirsingh back on his feet again,” says Grigorios Lamaris, MD, PhD, assistant professor in the Division of Plastic and Reconstructive Surgery at McGovern Medical School.

According to Lamaris, who teamed up with Greaser to perform the flap surgery, microsurgical techniques have revolutionized the options available to patients like these. Not too long ago some of them could have ended up with amputations, he says. “Over the course of the last 20 years we have been able to keep pushing the envelope in using different types of tissue (skin, muscle, or bone), new areas of the body as donor sites, or smaller arteries and veins as the recipient vessels – all because of the development of different surgical techniques and the availability of higher magnification.”

In October 2018, about eight months after Sookbirsingh first ruptured his Achilles tendon, he underwent a tendon transfer and flap surgery. The 8-hour procedure, which took place at Memorial Hermann-Texas Medical Center, was a success.

The joint effort made it possible. “A reconstruction like this would not be a possibility with a plastic surgeon alone or an orthopedic surgeon alone. The wound would not have healed unless we were able to transfer healthy tissue from elsewhere on the body,” Lamaris says. “The typical success rate in big centers like ours is around 98 percent.”

This case is extreme, Greaser admits, but he says when complications like infections do happen, they need to be dealt with expeditiously. 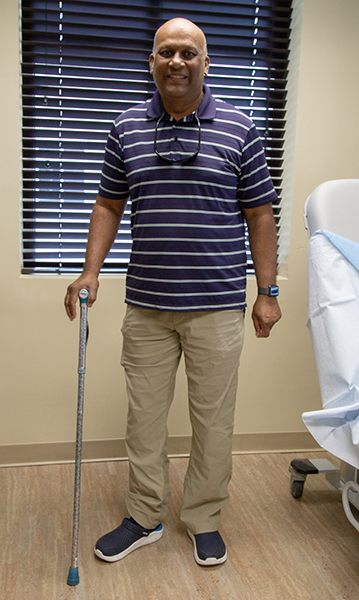 After not being able to walk for an entire year, Dave Sookbirsingh is now able to walk with a cane. (Photo by Maricruz Kwon/UTHealth)

For patients, it’s important to know that your physician understands not only how to treat the Achilles injury but also how to manage complications associated with it, Greaser says. “These cases where you get an infected surgical repair site and end up losing your Achilles tendon are fairly rare; much less than 1 percent of Achilles ruptures result in a complicated reconstruction procedure like this.”

Greaser also says it’s important to take the time to find the right doctor and to get the procedure done through a minimally invasive approach, which could help avoid complications in the first place. Once Sookbirsingh found Greaser through a Google search, he advocated for himself to get the treatment he needed.

When all was said and done, Sookbirsingh had seven procedures on his foot. He started physical therapy in December 2018. Then, slowly, he started to get better. “The rehabilitation is gradual but the functional outcome is far better than the alternative which would have been an amputation,” Lamaris says.

In March 2019, he was walking with a cane. “It’s something I hadn’t done for the last year,” Sookbirsingh says. “Now, I am just concentrating on getting back to a normal walking rhythm. But I will be able to bike ride in about six months.

“It was a heck of a year. It all happened in one unbelievable year. Still, I can see the light at the end of the tunnel on this one,” Sookbirsingh adds. “I can’t thank these doctors enough.”