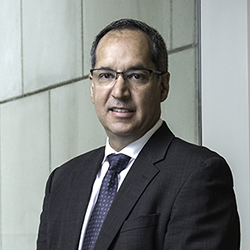 Dr. Blackburn is the Executive Vice President and Chief Academic Officer at The University of Texas Health Science Center at Houston (UTHealth).  In addition, he is a Professor in the Department of Biochemistry and Molecular Biology, Director of the Pulmonary Center of Excellence, and as of July 1, 2020, Dr. Blackburn has served as the Dean of Research, ad interim, at McGovern Medical School at UTHealth, and he serves as Dean of The UT MD Anderson Cancer Center UTHealth Graduate School of Biomedical Sciences. He holds the John P. McGovern Distinguished Professorship in Biomedical Sciences and the William S. Kilroy, Sr. Distinguished University Chair in Pulmonary Disease.

Dr. Blackburn received his undergraduate degree in Biology from King College in Bristol, TN, in 1988. In 1993, he obtained his Ph.D. in Developmental Biology from Thomas Jefferson University in Philadelphia, PA, for studies examining the role of adenosine signaling during implantation. From 1993-1997, he was a National Institutes of Health (NIH) Postdoctoral Fellow in the Department of Biochemistry at Baylor College of Medicine in Houston, TX, working to define the functional aspects of adenosine deaminase deficiency. He joined UTHealth in 1997.

Dr. Blackburn is renowned for his research examining the role of adenosine signaling in the regulation of chronic lung diseases such as chronic obstructive pulmonary disease (COPD), asthma, idiopathic pulmonary fibrosis (IPF), and pulmonary hypertension. He has developed and characterized numerous models designed to examine the contribution of endogenous adenosine to the regulation of chronic lung disease.  His research efforts have led to the development of novel therapies for the treatment of chronic lung diseases that include adenosine deaminase enzyme therapy and the use of specific adenosine receptor antagonists to regulate pulmonary inflammation and remodeling. Current efforts in his laboratory focus on defining specific mechanisms of adenosine receptor signaling in airway inflammation and remodeling and conducting proof of concept studies in humans with IPF, COPD, and pulmonary hypertension to promote the translation of his findings into novel therapies for these patients.

Dr. Blackburn’s findings have been published in over 160 manuscripts found in top scientific journals. His work has been continuously funded by the NIH for more than 18 years, and he has secured more than $30 million in extramural funding to support his studies. He is currently the Lead Investigator of a $10 million program project grant from the NIH to examine adenosine signaling in acute and chronic disease states. In addition, he has served as a member of The Lung Injury Repair and Remodeling NIH Study Section and has received several awards, including an American Lung Association Career Development Award, a Young Investigator Award from the American Asthma Foundation, the Paul E. Darlington Mentorship Award, the 2013 UTHealth President’s Scholar Award for Excellence in Research, and was made a Distinguished Teaching Professor by The University of Texas System. He is a Fellow of the American Associate for the Advancement of Science.