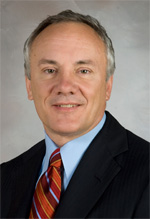 Eric Fernette, Vice President, Human Resources, and Chief Human Resources Officer, is responsible for all aspects of human resources at The University of Texas Health Science Center at Houston. Among the service areas he leads are employment, recruiting, compensation, employee relations, training and development, Equal Employment Opportunity, and UT Counseling and WorkLife Services and student and employee assistance programs.

Fernette came to The University of Texas system in 2002, serving as M.D. Anderson Cancer Center's Director of Recruitment before joining the Health Science Center in 2008. He brings to the university more than four decades of Human Resources experience.

After earning a Bachelors of Political Science from Arizona State University, Fernette began his career with ITT Corporation, a global manufacturing firm of more than 300 thousand employees. His nine years with ITT culminated with Fernette's position as head of Human Resources for the company's Information System Division in San Jose, California.

From 1987 to 1997, Fernette led various human resources efforts in the U.S. and abroad for Compaq Computer Corporation, leading to his position as head of human resources for North America.

Prior to working for The University of Texas, Fernette was the Officer and Executive Vice President of Human Resources at the international IT consulting firm Documentation Associates Consulting Group (DACG) from 1997 to 2000.

Following a successful initial public stock offering that positioned DACG as the top SAP training and documentation consultant to Fortune 500 companies, Fernette took the opportunity to travel the country with his family for two years, providing a valuable home schooling education and life experience for his children.