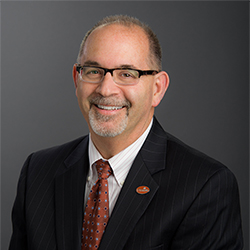 Dr. Valenza is a Houston native who attended The University of Texas at Austin before enrolling at UTHealth School of Dentistry, where he graduated in 1981. He completed a general practice residency at The University of Tennessee Memorial Hospital and practiced full time in the Nashville area from 1982-87 while also serving part time on the faculty of Meharry Medical College School of Dentistry.

In 1987, Dr. Valenza was appointed to the full-time faculty at UTHealth School of Dentistry (then known as UT Dental Branch), where he initiated the award-winning General Practice Residency program with Memorial Hermann-Texas Medical Center, serving as the program’s director until 1996. From 1994-96, he also served as director of advanced education and extramural affairs.

In 1996, Dr. Valenza was named associate dean for patient care, a position he held until 2004. During that time, he oversaw many innovations affecting patient care, including:

From 2002-04, Dr. Valenza also served as acting chair of a new Department of Diagnostic Sciences, overseeing initiation of a number of new courses and clinics.

He served as UTHealth School of Dentistry’s executive associate dean from 2004-09 and was directly responsible for several initiatives, such as starting the faculty group practice (UT Dentists), developing a clinical simulation clinic, converting to electronic patient records and digital radiography, and obtaining new equipment for the school clinics. He also oversaw two departments (Educational Support Services and Educational and Technology Services) responsible for technology, informatics, and general educational support at the school.

Dr. Valenza led the design, planning, and construction of a new, 314,000-square-foot building and conference center to replace UTHealth School of Dentistry’s 1955 facility. The new building was completed in 2012.

Dr. Valenza teaches both undergraduate and graduate students and conducts clinical research, primarily in dental informatics and clinical care. His research interests include clinical simulation, dental informatics, and the use of technology in patient care. He has authored/co-authored numerous papers, chapters, and reports, and received grants totaling more than $1.5 million.

In 2007, Dr. Valenza was inducted into The University of Texas Kenneth I. Shine, MD, Academy of Health Science Education, and in 2012, the UTSD Alumni Association named him “Outstanding Alumnus.” He received the Greater Houston Dental Society President’s Award in 2004 and 2012-14.

In 2019, the Texas Academy of General Dentistry named Dr. Valenza the Texas Dentist of the Year™.