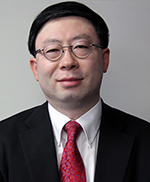 Dr. Jiajie Zhang received his PhD in Cognitive Science from the University of California at San Diego. He served as an assistant professor in the Department of Psychology at Ohio State University before being recruited to The University of Texas School of Health Information Sciences* (now known as the UTHealth School of Biomedical Informatics) in 1998 as an associate professor. Dr. Zhang was appointed associate dean of research in 2002 and granted tenure in the same year. He was promoted to professor in 2005.

Dr. Zhang holds the Dr. Doris L. Ross Professorship and has been the recipient of the John P. McGovern Outstanding Teaching Award. He is an elected Fellow of the American College of Medical Informatics.

Dr. Zhang is the principal investigator and director of the National Center for Cognitive Informatics and Decision Making in Healthcare (NCCD, also called SHAPRC), which is funded by a $15 million grant from the Office of National Coordinator for Health IT under the SHARP program to lead the national effort on EHR (electronic health record) usability, workflow and cognitive support. He has authored more than 150 publications.

In his capacity as associate dean for research, Dr. Zhang coordinated the school’s effort to increase its research awards from $2 million in 2006 to $37 million in 2010 and was instrumental in establishing several research centers including the NCCD. During his time as the interim dean, Dr. Zhang led the school’s curriculum redesign efforts to meet the emerging needs of students and also hired several new faculty members to reinforce the school’s expertise in natural language processing, bioinformatics and patient safety with plans to recruit more faculty members. Additionally, he led the effort to complete the school’s space consolidation plans to improve communication and collaboration.

Dr. Zhang began serving as interim dean of the School of Biomedical Informatics on April 2, 2012 and was appointed dean of the school on March 1, 2013.