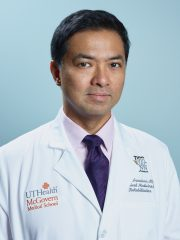 Dr. Gerard E. Francisco is Chairman and Professor of Physical Medicine and Rehabilitation (PM&R) at the The University of Texas Health Science Center at Houston McGovern Medical School.. Concurrently he is the Chief Medical Officer at TIRR Memorial Hermann Hospital, which consistently ranks among the top three rehabilitation hospitals in the US News and World Report.

While his clinical expertise is in brain injury and stroke rehabilitation and spasticity management, Dr. Francisco’s recent research projects focus on the integration of technology in enhancing motor recovery across different populations. These include a federally-funded investigation of a non-invasive brain-robot interface for stroke, vagal nerve stimulation to augment post-stroke upper limb rehabilitation, combined non-invasive brain stimulation and robot-assisted therapy for upper limb motor recovery in persons with incomplete tetraplegia, and lower limb wearable exoskeletons for stroke, spinal cord injury and multiple sclerosis. These projects are conducted at The NeuroRecovery Research Center at TIRR, of which he is the founding director.

Dr. Francisco is immediate past president of the Association of Academic Physiatrists and past chair of the Accreditation Council for Graduate Medical Education Residency Review Committee for PM&R, and currently a director of the American Board of PM&R. He is also the founding editor of the Journal of the International Society of Physical and Rehabilitation Medicine. He was the American Academy of Physical Medicine and Rehabilitation’s Zeiter Lecturer in 2011 and Distinguished Member in 2015. A year later, he was honored as the Sidney Licht Lecturer by the International Society of Physical and Rehabilitation Medicine, the largest PM&R organization in the world. Dr. Francisco was elected to the prestigious National Academy of Medicine in 2017.