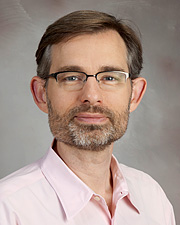 For the last 18 years, I have been working as a neuro radiologist at the University of Texas Health Science center of Houston ,now UTHealth. I've been fellowship director of the neuro radiology program for 16 years, successfully navigating three reaccreditation cycles an expanding the fellowship from one fellow to four. I served as chief of the section of neuroradiology for eight years, and oversaw the expansion of the Department from a staff of 4 to a staff of eight. During that period, I was the primary point of contact between neuroradiology and other divisions within medical school , and provided lectures And lead interdisciplinary conferences with medical students, radiology residents, Neuroradiology fellows, and residents in the neurology and neurosurgery departments .Five years ago, I successfully recruited a section chief to replace me, and have focused my efforts on academic collaborations with the Department of neurology, chiefly in the stroke division, coordinating and serving as the main reader for the core imaging lab for clinical trials and research projects . My main interest is in vascular neuroimaging, but I remain deeply involved in spine imaging and procedures and continue to be involved in the section through educational efforts and administration.

The University of Texas Health Science Center at San Antonio

The University of Texas Medical Branch at Galveston

The University of Texas Medical Branch at Galveston