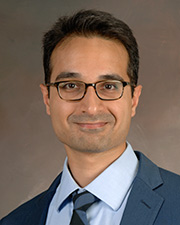 Dr. Sheth has co-authored many studies, which have been published in Cell, Nature Biotechnology, PlosONE, and the Journal of NeuroInterventional Surgery. For his research work he has been awarded grants from the American Heart Association (AHA), Society for NeuroInterventional Surgery Foundation, and National Institutes of Health. He has also received numerous honors and awards including the AHA International Stroke Conference Junior Investigator Travel Award, American Academy of Neurology (AAN) Resident Scholarship Award, American Society of Neuroradiology Trainee Award, and the Henry Asbury Christian Award for Excellence in Independent Research from Harvard University.

In stroke care, the extent of irreversible brain injury, termed infarct core, plays a key role in determining eligibility for acute treatments, such as intravenous thrombolysis and endovascular reperfusion therapies. Many of the pivotal randomized clinical trials testing those therapies used MRI Diffusion-Weighted Imaging (DWI) or CT Perfusion (CTP) to define infarct core. Unfortunately, these modalities are not available 24/7 outside of large stroke centers. As such, there is a need for accurate infarct core determination using faster and more widely available imaging modalities including Non-Contrast CT (NCCT) and CT Angiography (CTA).

Challenges Faced by Neurology Trainees in a Neuro-Intervention Career Track

The widespread adoption of endovascular therapy (EVT) for emergent large vessel occlusion has led to increased nationwide demand for neuro-interventionalists, heightened interest among Neurology residents to pursue neuro-intervention (NI) as a career, and increased importance of NI exposure for all Neurologists who care for patients with AIS. Currently, exposure to NI and its career path are not well-defined for Neurology trainees.

Over the Horizon: The Present and Future of Endovascular Neural Recording and Stimulation

The past decade has witnessed an explosion in applications for neural recording and stimulation in the treatment of clinical disorders. Neuromodulatory approaches are now a mainstay of care for essential tremor and Parkinson’s disease, and are expanding rapidly into a wide range of other neurological and psychiatric diseases. In parallel, advancements in endovascular approaches to cerebrovascular diseases have resulted in minimally invasive techniques that deliver devices to neural tissue in the central and peripheral nervous systems, with significantly improved safety and efficacy. In this review, we discuss the history of endovascular neural recording and stimulation, its current progress, and applications for neurological disease.

American Board of Psychiatry and Neurology, Certification in Neurology

American Board of Psychiatry and Neurology, Certification in Vascular Neurology

His research focuses on the application of NeuroImaging in acute stroke, particularly related to endovascular stroke therapy (EST). He directs the UTHealth Stroke Institute Acute NeuroImaging Core and his laboratory serves as the Imaging Core Lab for a large multi-center EVT Registry (COMPLETE).  His laboratory is highly experienced in the application of machine based learning approaches. Dr. Sheth in collaboration with Luca Giancardo, PhD at our School of Biomedical Informatics is developing much-needed application tools for multi-modal CT based selection of stroke patients in the community setting to determine which patients would benefit from long distance transfer to specialized centers for EST.  He is funded by a 3-year career award from the American Academy of Neurology and the American Brain Foundation and is on the steering committee for the TESLA trial testing the efficacy of EST for patients with large infarcts.