Skip Navigation
Menu
We have provided our community a list of resources for stroke care during the COVID-19 pandemic. 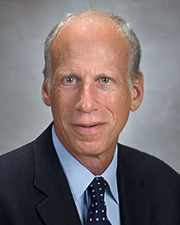 Dr. James Grotta received his education at Dartmouth College and his medical training at the Universities of Virginia and Colorado, and at Massachusetts General Hospital.  He spent two years in the U.S. Public Health Service (Indian Health Service).

Dr. Grotta’s research focuses on development of new therapies for acute stroke patients.  He has been funded by the National Institutes of Health (NIH) for laboratory studies on the biology of brain injury and recovery in animal stroke models.  He has played a leadership role in many clinical research studies of both thrombolytic drugs and cytoprotective agents after stroke.  He is presently funded by NIH for a program project to carry out a series of novel pilot studies aimed at amplifying the existing benefits of intravenous TPA (Tissue Plasminogen Activator).

Dr. Grotta has orchestrated development of a very successful collaborative network between the UT Stroke Team, Memorial Hermann Hospital, Houston Fire Department-Emergency Medical Services, and other regional stroke centers to increase the delivery of appropriate therapy to a large number of acute stroke patients in Houston.  He has extended these efforts to rural areas through regional educational programs and, more recently, telemedicine.

Dr. Grotta has been an editor of the Annals of Neurology, Stroke and many other peer reviewed journals, and has been a member of several NIH and FDA review panels.

He was a recipient of the Feinberg Award for Excellence in Clinical Stroke (1999), Physician of the Year (2006), and the Eugene Braunwald Academic Mentorship Award (2010), all from the national chapter of the American Heart Association (AHA), and awards for teaching excellence at UT Medical School.  He has authored or co-authored more than 250 articles in peer-reviewed journals.