While an undergraduate student, Jeffrey Woods recognized the value in creating interdisciplinary teams. “Interdisciplinary teamwork started as an interest of mine throughout undergrad,” said Woods, now a first-year student at McGovern Medical School at The University of Texas Health Science Center at Houston (UTHealth). “I worked in a clinic and could see firsthand the dysfunction between different teams and disciplines within the field of medicine. Once I started medical school, I knew I wanted to promote work around interprofessional collaboration.”

“When Jeff and I started talking, he was really interested in starting a student event around collaboration and interprofessionalism. It had been at the back of my mind, and when he approached me with the idea, I instantly knew we had to make it happen,” said Niharika Neela, a first-year medical school student who was joined by cohort first-year medical school student, Luciano Posada.

Once the group of three began meeting, they didn’t quite know what to name the training event. As a cross between a case competition and a hackathon, they decided “Healthcare Innovation Challenge” to be the most descriptive. 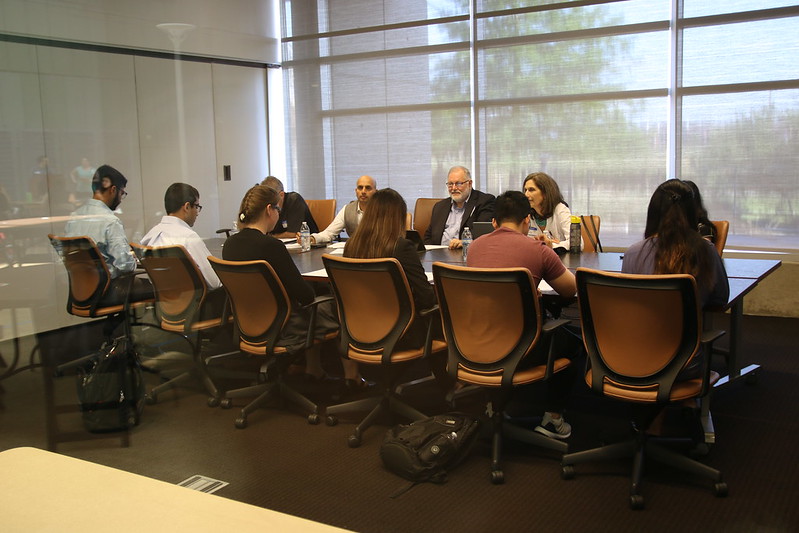 When planning this year’s inaugural “Healthcare Innovation Challenge” it took time to build necessary contacts and an interprofessional network. When the group met Lee Revere, PhD, and Jennifer Swails, MD, directors of Interprofessional Education (IPE), and Stephen Jones, program manager of IPE at UTHealth, the pieces began to fall into place.

“When it came to formulating the challenge, there was a natural progression of ideas to create an opportunity for students to ‘get their hands dirty’ so to speak,” said Posada. “When trying to synthesize a proposal each participant noticed their team members had interpreted a solution to a shared problem in a different way,” Posada said.

“You don’t experience the tension and strain that occurs within interdisciplinary teams when you’re part of a homogenous group at medical school, but it immediately presents itself in practice,” Niharika Neela said.

The inaugural challenge featured 10 teams with six members each, one member each from the six schools at UTHealth for a total of 60 student participants. As part of the competition, the teams needed to address a current health care issue and develop a solution. Each team had approximately three weeks to introduce themselves, review the case, conduct research, and formulate a plan to address the problem. The day of the challenge, each team presented to a panel of faculty mentors, who then provided feedback to the team directly before independently ranking each presentation.

“This IPE activity was different from the existing simulations because it created an opportunity for interprofessional students to work within their teams for a longer period of time. This allowed the teams time to form, norm, storm, and perform as they worked together to solve genuine health care issues facing society today,” said Stephen Jones.

This year’s winning team proposed a solution to reduce the cost of health care by building a program around dental hygiene in nursing homes. With 1,200 nursing homes in the state of Texas, consisting of 92,000 residents and 12,600 beds, the impact of daily oral hygiene could reduce occurrences of cardiovascular events, aspiration pneumonia, and hospital readmission rates by providing preventative dental care to nursing home residents.

For more information on interprofessional education at UTHealth, contact Program Manager Stephen Jones at 713-500-5199 or Stephen.W.Jones@uth.tmc.edu.