Below is a flowchart that details the process: 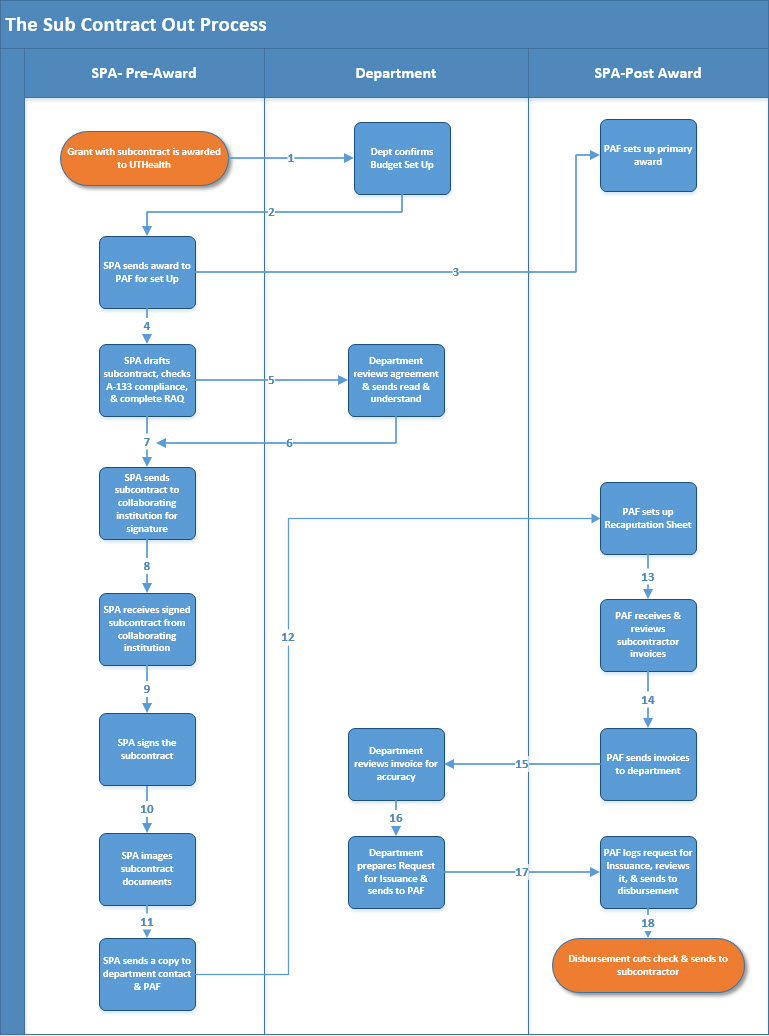 If a grant awarded to a department has a subcontract, SPA  will contact the subcontractor when the award arrives. However, it is the department’s responsibility to follow up with SPA to ensure that the subcontract is being initiated in a timely manner. Contact with SPA should be by email, saying something such as the following:

Another departmental responsibility is to only do business with “eligible” subrecipient agencies. Eligible agencies include:

Departments also assist SPA in identifying “higher risk” subrecipient agencies or contracts that will need an increased level of monitoring activities, including:

It is also important that the departments work closely with SPA to ensure that the subcontract includes language that provides a framework for compliance. This is done by:

The PAF Team sets up the Recapitulation Sheet to record subcontract invoices and payments.

The PAF Team receives invoices for the subcontract and does the following:

After completing the review and verification, the PAF Team sends the invoice to the department for their review and certification for payment.

After completing the review and following up and resolving any concerns, the PI should approve the invoice for payment. The departmental staff will enter a Non-PO voucher in the PeopleSoft FMS system so that a check can be mailed to the subcontractor. The department sends the completed Non-PO voucher with its supporting documentation to the Disbursements Team, who will forward it to PAF for review.

The PAF Team logs the voucher on the Recap sheet, reviews it, and sends it back to Disbursements for final processing.

Disbursements then cuts a check and sends it to the subcontractor.